KAUKAUNA, Wis.— We’ve all seen some pretty spectacular double plays this season, but we’ll nominate Kaukauna’s McKenna Lowe for pulling off the best double dip of the year.

In fact, we’ll even double down on that claim.

Lowe, a freshman at Kaukauna High School, will be taking part in Saturday’s WIAA state cross country meet at the Ridges Golf Course in Wisconsin Rapids as part of the defending champion Ghosts’ team.

But this will not be her first state tournament experience this fall.

Just a couple of weeks ago Lowe, who qualified as an individual, took part in the WIAA state golf meet at University Ridge Golf Course in Madison. She was just one of three freshmen in the Division 1 field and finished the two-day event in a tie for 41st place (86-87-173) in the 78-player field. She was also the low freshman.

So, really, this is taking double duty to a whole new level.

It took two coaches to double team to meet Lowe’s wishes which, in this day and age where most high school coaches prefer to have their athletes dedicate themselves on a single-sport year round, was an important victory in itself.

“The way it’s kind of gone, a lot of sports are pushing that year-round stuff but, you know what, if there is an athlete that is special out there, and really wants to do multiple things, why hold them back from that?”

So this is how it works. Lowe leaves her home around 7:15 a.m. each day, her backpack carrying more food than books. 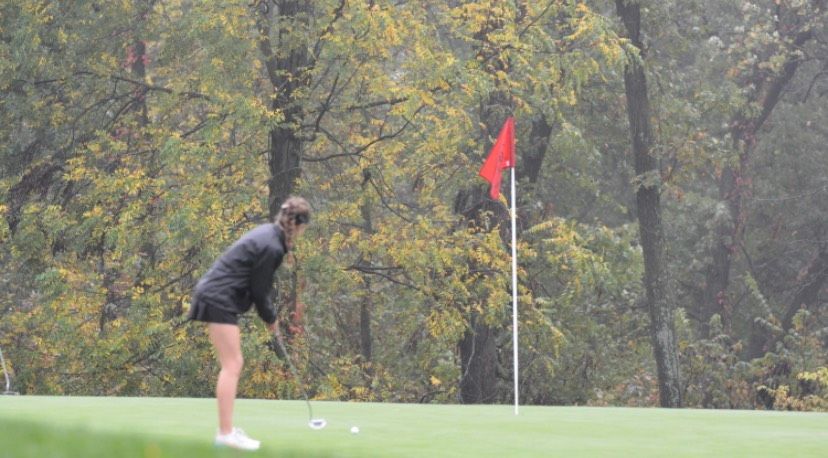 “I would have to pack a huge lunch, because I was starving after school; I would be snacking all the time,’’ she said. “And I was almost eating like a small little dinner before golf because I didn’t have time to go home. We went through a lot of food. Lots of granola bars and planning throughout the week; just pack more than expected. I go through it fast.”

After school she would partake in cross country practice and when finished, head over to the golf course to work on various aspects of her game. Then you toss in homework, and school – Lowe is also a member of the Key Club and volunteers in a suicide-prevention group called Sources of Strength – and you not only wonder how she pulls it off, but excels.

“It’s organization and focus on what they’re doing,’’ said Kinas of McKenna, as well as his daughter Alexa. “Knowing priorities that have to take place and really understanding where they’re at with each one of them. So if you’re thinking about a cross country race coming up, or you have a golf match, you have to focus on that at that point in time. Again, you’re always balancing your school work and everything else. It’s pretty crazy how these girls have done it and put their focus on things when it really mattered.”

If you’re wondering if there are skills that translate between the two sports, it’s all in your head.

“She’s smart,’’ said Carolyn Barnett-Howe, who has coached Lowe in the golf’s offseason since she was 10. “There’s a strategy in running a race and there’s a strategy to playing golf. And she is really good at saying, ‘These are the tools I have to work with. This is how I can get it done, to the best of my ability.’ And that’s kind of how she approaches everything. So she is refreshingly … it’s like coaching a kid without an ego. And it feels like coaching a really smart kid, like an old soul.”

It’s not until sometime until after 6 p.m. when Lowe returns home each day, at which time she can’t wait to see her double bed.

“Now that golf has ended I have a little more energy but, when I was doing golf and cross country, I would get home and eat and if I have any homework I would try and get it done,’’ Lowe said. “And then I would go straight to bed. I was in bed by 8:30 p.m. I definitely just hit the pillow and passed out.”

In the little free time she has in the fall, it’s family, friends and, of course, the kitchen.

“I also love to cook and bake and try new recipes for running and stuff, healthy recipes,’’ she said. “I love to eat new food.”

The Ghosts will enter Saturday’s race as the fourth-ranked team in the latest Wisconsin Cross Country Coaches poll. And Lowe plans to get to the finish line on the double.

“It’s definitely the biggest race I’m going to be running in ever,’’ said Lowe, whose fifth-place at the sectional meet would have qualified for the state meet as an individual. “I just want to stay with my teammates and push myself. It’s the last race of the season and just leave it all out there.”

No matter how it turns out, Lowe’s double state-tournament appearances in a single season is a rare, impressive feat.

“McKenna’s a great kid,’’ said Kinas. “She works hard at everything that she’s doing so she deserves all of this stuff.’’

And McKenna is very thankful, acknowledging she could never pull this off without the support of her family and two willing coaches. More than anyone, she knows she is doubly blessed.

Does Promote On Tiktok Work?

Struggling with acne during monsoons? Tips to improve skin health