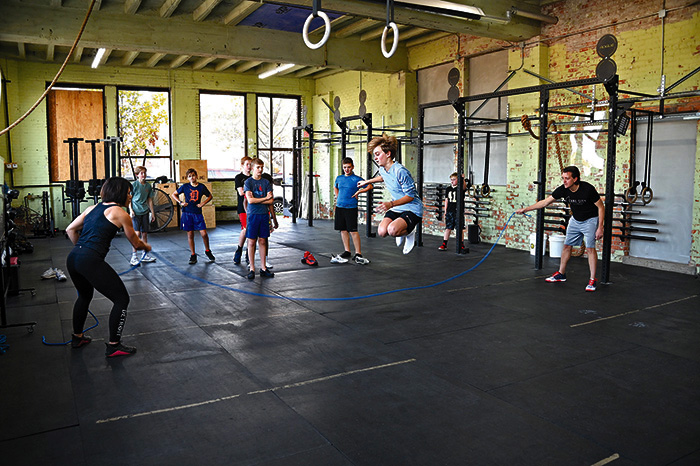 At 4 p.m. Mondays and Wednesdays inside Core City Fitness, a CrossFit-affiliated gym in Detroit, a group of young boys and girls flip tires, swing kettlebells and practice Olympic lifts. If this doesn’t sound like your average after-school program, that’s because it isn’t.

“We’re a type of strength and conditioning program, but we’re really more than that,” said Helen Taylor, director of Core City’s CrossFit Kids, a fitness method that teaches functional movements to help kids get stronger, more coordinated and in better health.

“We typically think of fitness as physical,” Taylor said. “We want to look good, but I think of it as being able to do things and keep doing them as we get older. I want kids to learn how to do things and do them well, so as they grow, they will be more capable.” 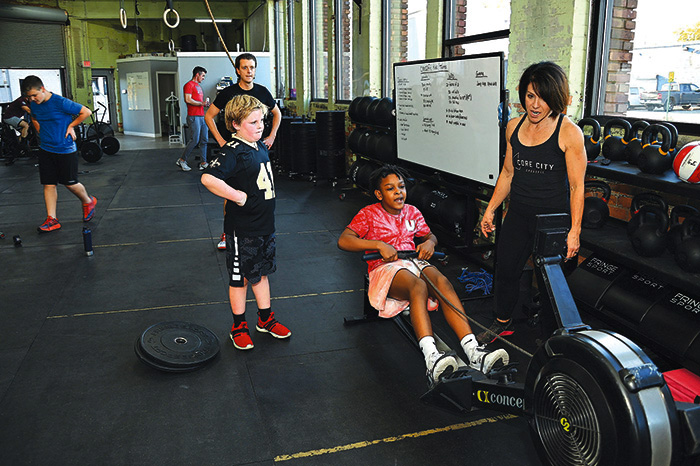 Taylor, who is a fourth-degree black belt in Tae kwon do and has more than 22 years in martial arts training for herself and coaching adults and kids, runs well-oiled workouts geared toward 7- to 14-year-olds that are equal parts work and play.

“It’s a very delicate balance,” Taylor said. “I want it to be fun, but I want there to be some structure and some learning without being too strict.”

The class, which meets twice a week for an hour after school, starts with instruction and a little education from Taylor. The kids huddle around a whiteboard that displays the day’s movements and often identifies what muscles they’ll be using. Closely mimicking the traditional CrossFit format, a thorough warmup — any combination of aerobic exercise like stationary bike mixed with a weights interval like dumbbell deadlifts, hang-cleans or push-jerks — is followed by a strength component and “workout of the day.” For kids, that’s a 12-minute circuit of high-intensity strength and conditioning exercises. When the buzzer sounds, they are exasperated, smiling and high-fiving.

According to the American Academy of Pediatrics, it is safe for children and adolescents to start a light weightlifting routine after age 8, as balance and postural-control skills mature to adult levels by 7 to 8 years of age. Furthermore, research has shown that high-repetition, lightweight training is safe and doesn’t require full muscle fatigue to be effective in young people.

“We’re really careful about anything to do with weights. You don’t want to be lifting really heavy weights when you’re young, but you want kids to get used to moving their body,” said Core City’s co-founder Jeff Winkler, a financial advisor and Grosse Pointe resident who owns the gym with five fellow CrossFit coaches. 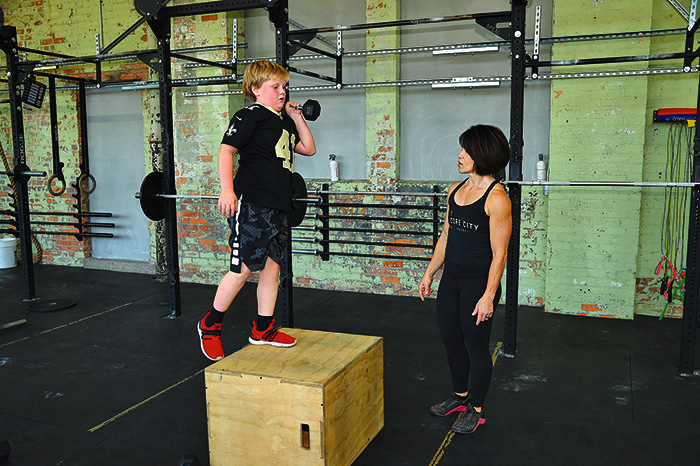 Photos by Renee Landuyt
Taylor keeps an eye on McCulloch’s form while he exercises.

Core City Fitness, located in its namesake Detroit neighborhood, just past the northwest border of Corktown and Woodbridge, opened in May 2020 and has since grown to 100 members. It started offering CrossFit Kids last June.

“My real job is getting all the kids there,” said Winkler, who brings his son, Riley, 13, and a slew of boys and girls from the St. Paul Catholic School’s basketball team he coaches, to train in Taylor’s program. “It has a lot of crossover for sports — getting them stronger, to jump higher, run faster. Some of the kids who come are already good athletes and some are not as coordinated yet. They’re all at different levels.”

Brothers William and Henry McCulloch, ages 14 and 10, respectively, are enrolled in their third session of the program and have experienced more than just physical gains.

“This has done wonders for their confidence,” said the boys’ mother, Lauren McCulloch.

In just a few months she’s watched Henry, the youngest in the group, who said he likes “lifting weights and getting more advanced,” make significant strides.

“Henry was really afraid of the box jump and he learned to face his fear and get good at it,” McCulloch said. “It’s not just about sports. I love how they make it so fun for them. I’m so proud of these guys.”

Last week at the end of the workout, the brothers went head-to-head in a game of helicopter jump rope. In the end, William was the last man standing, but both boys were showered in applause from their coaches and peers.

Touted as a workout for everyone, CrossFit is scalable and modifiable, which is why its kids’ variation works. A focus on functional movements is intended to improve all the actions one does during everyday life outside the gym, like picking something up off the floor or lifting something over the head.

“We teach (the kids) all the CrossFit moves — just safer, slower and more age appropriate,” Taylor explained. “We want them to learn the standards for things. That’s why I quiz them. I want them to understand what they’re doing, why and how it benefits them. It’s empowering to have that information and remember it and then use it.”

One of the owners of Core City Cross Fit, Jeffrey Winkler, rides on the bike while the students work out.

An intimate class size — 12 kids or fewer — allows Taylor to keep track of everyone’s capabilities and watch closely for their safety. She explained that the older kids who have gone through puberty can safely add more weight, but that doesn’t mean they should. She guides each child based on their individual fitness and agility.

“I try not to overcorrect or praise too much,” said Taylor, noting that a lot of the kids are in that awkward growing stage. “They don’t do it perfectly, but most adults don’t do it perfectly. My goal is to empower kids to feel better about themselves and feel like they can do anything.”

Another component of CrossFit is community. A strong sense of camaraderie fuels the workouts, evident in the kids’ adaptation where cheering and congratulatory fist pumps abound. Taylor’s program nurtures a focus on individual goals and playing fair, teaching young people that the way they act among their peers carries weight.

“Helen is really big on being honest,” Winkler said. “In CrossFit, you keep track of your own score and it can be frustrating when kids see their buddies finishing reps before them. Helen talks with them about integrity. That’s a big thing. These are skills they can use for the rest of their life.”

Free physical activity sessions for those in Cambridgeshire suffering arthritis

Green walls in offices have a positive impact on skin microbiota and enhance immune...